Traveling the Sand Road on the Way to Christine's 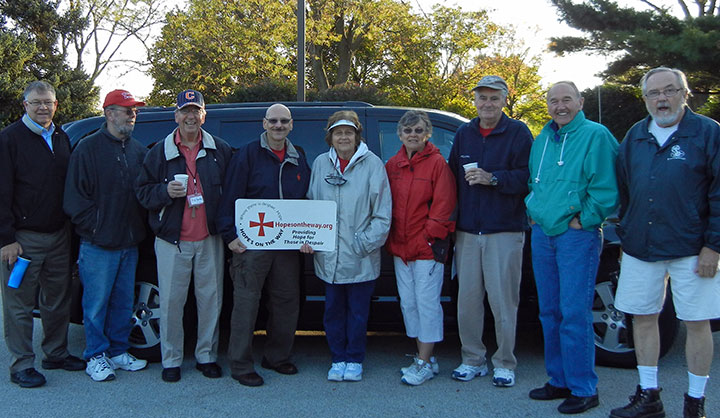 “Can you believe they have only been here five days?,” said Christine to her neighbor as they stood in the front yard and watched the house transformation. Those Catholics from Chicago and the Christian men from Go-International had completed quite a lot of work in a short time.

There were 12 altogether. Five from Go-International, a dedicated service group who came from Kentucky and Michigan. Nine others, seven men and two women, were from Hope’s on the Way, a volunteer service group consisting of deacons from the Archdiocese of Chicago and volunteers from their parishes. Traveling to other states was not new to this group, who has completed 11 mission trips to Louisiana, after hurricane Katrina and Rita and the subsequent levee breaks that caused severe flooding damage to New Orleans, and the surrounding parishes. After the past April’s violent tornadoes, the volunteers of Hope’s on the Way responded to a call for assistance in Tuscaloosa County, Alabama.

On October 15, 2011, with three vans loaded with tools, sleeping bags and supplies, the volunteers began their 720 mile trip, stopping about half way in Louisville, Kentucky, at The Church of the Holy Spirit, where overnight accommodations where provided. There final destination was Camp Coker, in Coker, Alabama. The camp was a former Methodist youth facility turned bunk house, with an attached outside shower facility and equipment warehouse. The camp would be their home for the week. They shared this space with the members of Go-International. They came together, ready and willing to serve a need, to help God’s community. 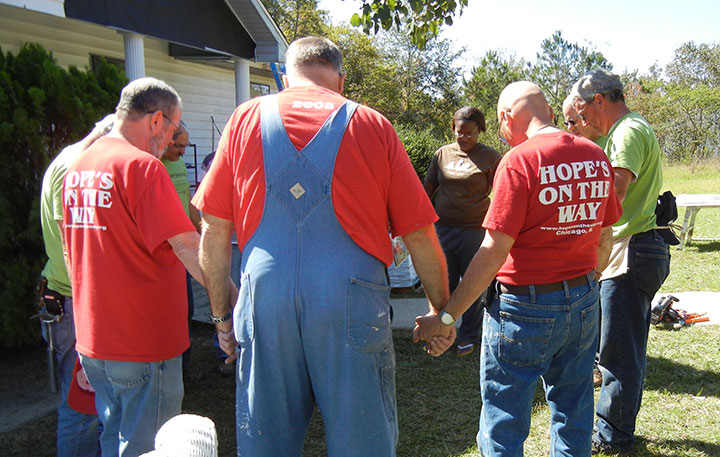 Ecumenical Prayer service with Christine and all who worked on the home during the week.

Bright and early on Monday morning they loaded up the vans and headed down Sand Road approximately 12 miles to their worksite, Christine Johnson’s house, in Fosters, Alabama. After the tornadoes had hit Tuscaloosa, the city was full of assistance, but few traveled to the outskirts where folks like Christine lived. Her home had been handed down from generation to generation. With the economy and her husband’s job loss it was difficult to maintain the home. Extensive termite and wind damage prior to the tornado had ravaged the family’s home. Then the tornado opened the roof sending water pouring through holes in every direction. The work of the 12 was simple…remove the families despair and return hope to Christine and the Johnson family. 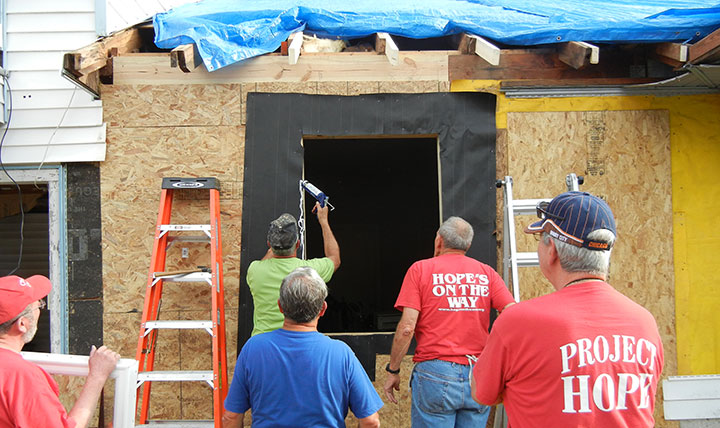 Installing caulk for the new window in the rebuilt wall.

During the next five days, the two teams worked together in unison. Termite damaged timbers were replaced by new beams.  A new window, insulated wall, electric outlets, vinyl siding and interior drywall replaced the damaged wall and unsafe existing fireplace. More siding around the home was removed and replaced. Besides the 88 degree temperatures and elevated humidity, the men battled wasp nests, spiders as big as your hand, fire ants, scorpions, and all sorts of other venomous creatures. But they persevered for the most important part of the house, the roof had to be completed, if the Johnson home was to be saved. The old shingles were removed, uncovering a deteriorated framing that had to be completely replaced, prior to the installation of a new shingled roof. While one team completed the wall and vinyl siding the other team prepared the roof completing the removal and new framing. Bundle after bundle of shingles were carried  up a ladder on the men’s s houlders, while waiting team members nailed them in place. The new shingled roof would give the Johnson family a stable leak-free house to call home for years to come. 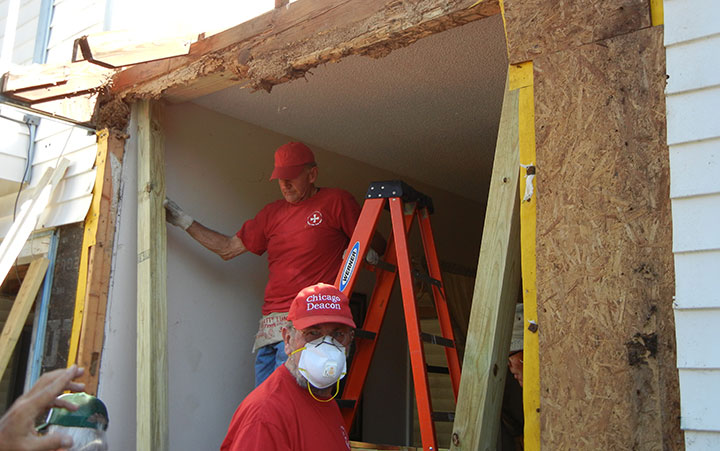 Friday afternoon, the two teams, Go-International and Hope’s on the Way came together and invited Christine to join in an ecumenical prayer service. Catholic’s and Methodists;, all dedicated faithful volunteers, praying together in thanksgiving for the opportunity to give it all for Christine and her family.

During the drive home little moans and groans could softly be heard. They had honored their commitment. Deacons, faithful volunteers, Christians, all servants of God’s people. They had given it all, laid all they had on the line to help another. They were bruised, bitten, and sore, exhausted from the experience. Yet they smiled through it all knowing they had received a priceless gift. It was truly a great day! 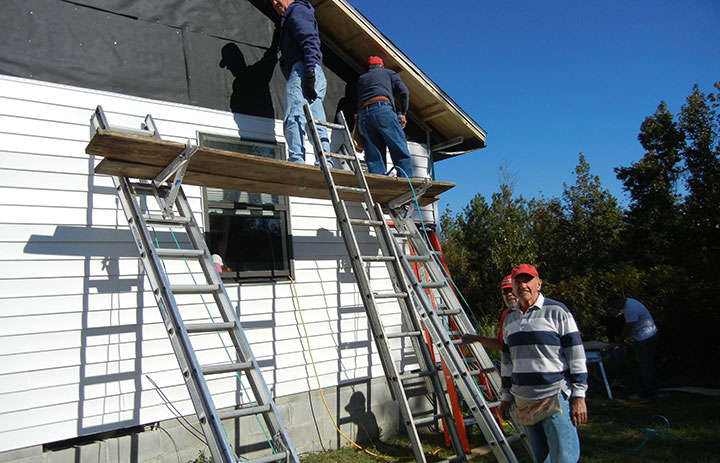 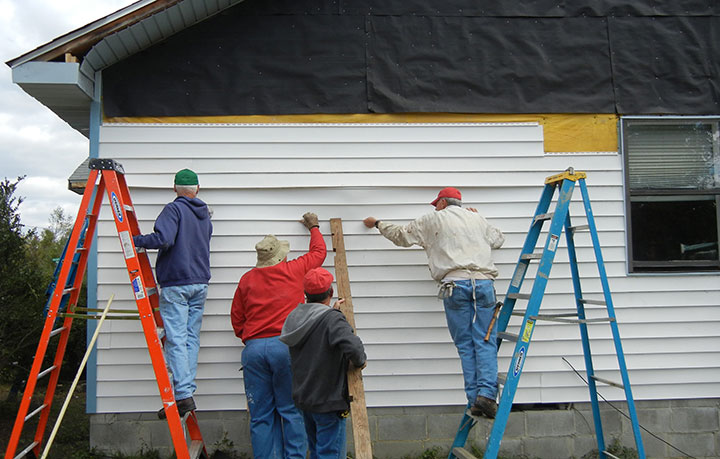 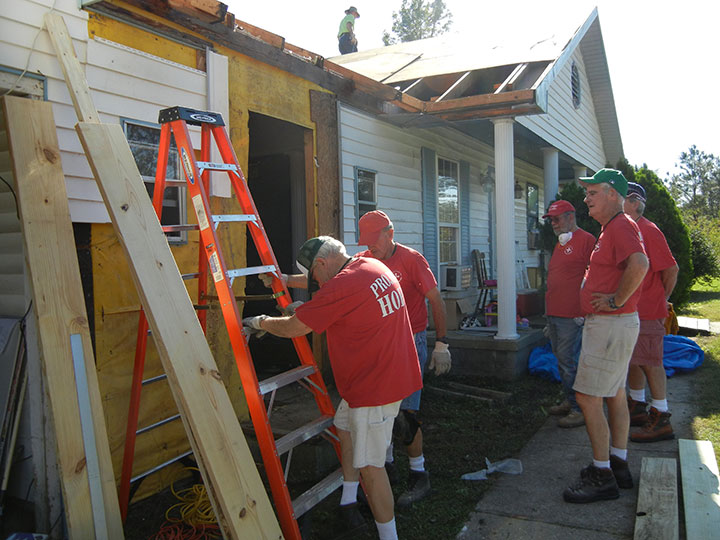