Hope's on the Way Builds "Sheds 4 Hope" for Washington, Illinois

(Lemont, Illinois, December 8, 2014) On a cold Friday morning, November 28, 2014, the day after Thanksgiving Day when many are thinking of Black Friday and shopping till they drop, six volunteers, all members of Hope's on the Way gathered at 6:30 AM for a prayer service prior to heading off for a two-day "Sheds 4 Hope" Mission to Washington Illinois. 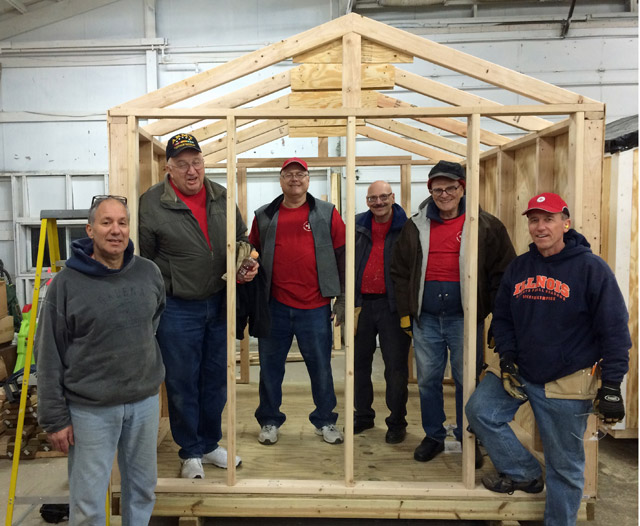 This was the second trip in November, as only three weeks earlier four sheds were erected and one existing at the site was also completed. The goal of the Bethany Community is to complete 40 sheds total to give to those that lost so much from the tornado that stuck their town last year. With the five completed earlier and the two to be finished during the next two days, the community will have 25 completed sheds. They have 15 more which they wish to complete in spring of 2015.

We arrived before 9:00AM at our destination, the Bethany Community Pole Barn, In Washington. The six men volunteer team did a tremendous amount of work that first day. While Tom Rinke and Don Krengiel cut the 2x4 lumber to sizes for the wall frames, the other members began the layout of the two floor platforms which were assembled. Next was the assembly of the wall frames and the cutting to size and nailing of the plywood siding.

After a warm lunch provided by Sam Dunlap, the project manager, we continued assembling the wall sections. Once this was completed all hands lowered the floor platform to the floor, and we began to raise the wall sections on the platforms and nail them to the floor frame. The pre-assembled rafters were easily installed once the walls were in place. Next, the roof sheeting was nailed to the rafters and by 5:30 PM when three of the members left much of the assembling was completed. Sal, John and Joe stayed overnight with the hope to complete the final items for the two sheds on Saturday.

At 9:00AM Saturday morning, after dinner, a good night’s sleep, and a hearty breakfast we were back at the pole barn to complete the work. Joe began the construction of the doors with the frames that Don had assembled, while John and Sal began to complete the back wall and front wall of the second shed. With the walls finished we focused completing the doors and set the doors in the shed openings. Three roofers came to add the felt and shingles to both sheds. By 5:30PM we were packed and ready to leave as they were completing the last course of shingles on the second shed.

Invited to return in the spring, volunteers will again be requested to complete the remaining 15 sheds. To volunteer for the next mission to Washington, or for any of our local projects, please contact us.