The fall meeting of the Southwest Regional Catholic Charities Advisory Board member’s brain stormed goals for the coming year. One idea was to visit the various facilities that Catholic Charities operates to see what could be additionally done to assist them. One of their facilities visited was the St. Francis De Paula Family Interim House, a shelter for families with children located on the south side of Chicago. 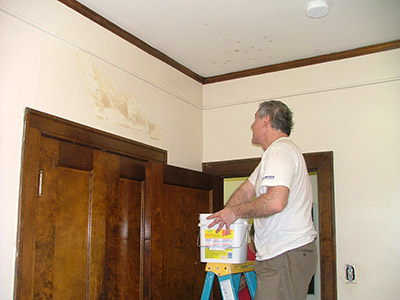 St. Francis De Paula can hold up to 17 households or approximately 54 people. Residents are allowed to stay for up to 120 days. During their stay, the guests are connected with a caseworker who assists them in becoming self-sufficient. Services and referrals made include substance abuse testing and rehabilitation, assistance in securing ID, enrolling in food stamps, financial literacy, employment services, and getting proper medical care. While living at the shelter, residents have house chores which include cooking for the entire shelter, cleaning, and washing.

Ms Huckabee, the director spoke of the shelter’s basic need of painting 28 resident rooms and closets. In a walk thru with the local director, Jean Stratton, the items that needed to be painted: expanded to the hallways, stairwells, the second kitchen, the bathrooms and the shower rooms. Some carpentry work was also needed. 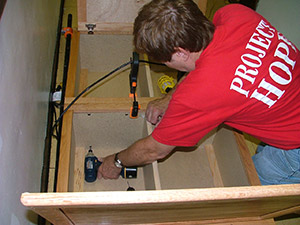 On presenting the painting project to the board of director’s of Hope’s on the Way it was decided that the toughest job, that of painting the hallways and the stairwells would be their responsibility. Through a generous donor they received twenty-five gallons of paint, enough to do the whole project. They then reached out to their core of 200 plus volunteers and selected dates in July to complete the project. Four dates were selected; July 9th, 10th, 15th and 17th. The volunteers gave 329 hours of painting labor finishing two and half hallways and a four story stairwell, renovating the second kitchen, and adding doors to storage shelves.

Future work in the fall will be completing the hallway not painted and the second stairwell, and other paint needed areas.